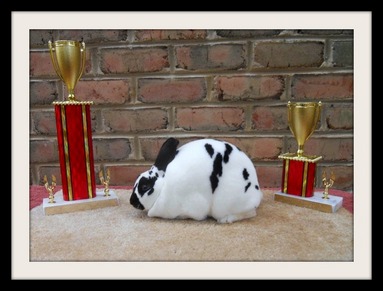 GC Briallu Hot Gossip - Multiple Best in Show and Best of Breed Winner!!!
Welcome to Briallu Rabbitry!!!  We are a small, 90 hole, ARBA registered rabbitry located in the rolling hills of upstate South Carolina.  I previously resided in the foothills of the Pocono Mountains in Pennsylvania and Barbara still lives there.  We strive to produce exceptional Mini Rex, Florida Whites, Satins, Californians, Holland Lops, and Netherland Dwarfs.

My name is Piper Smith Debruler and I have been raising rabbits since 1998 (Dutch, Mini Rex, Florida Whites, Satins, Californians, Holland Lops, and Netherland Dwarfs) and have come a very long way since the beginning :)  As of August 2012 I am ARBA Licensed Rabbit Judge #927.  I received my ARBA Rabbit Registrar License #R399 in September of 2008.  Barbara Shuklis Smith is my mom and she still lives in Pennsylvania with my dad!  They have the herd of Netherland Dwarfs and in a very short time she has done very well with them!!!  My husband, Jonathon Debruler has raised French Lops, English Lops, and Holland Lops.  Together, we  currently raise the Holland Lops.  Showing rabbits is a family affair around here!!

​  I utilize many top bloodlines and have created my own line of winning Mini Rex.  The Florida Whites are a more recent addition (2010) and we have had the pleasure of creating an exceptional line of Florida Whites over the past few years.  In Spring of 2013 we added Satins and look forward to working with this wonderful breed!

I am currently serving as the National Mini Rex Rabbit Club District 9 Director and I am also on the Standards Committee and the Constitution and By-Laws Committee.  I am the South Carolina Representative for the American Rabbit Breeders Association and the Mini Rex correspondent for the Domestic Rabbit magazine.  Currently, I serve as a Director for the Majestic Mini Rex Specialty Club, as well as fulfilling the duties of Open Sweepstakes Chairperson and Webmistress.

Barbara is currently serving as the head of the National Mini Rex Rabbit Club's Scholarship Committee as the Chairperson, is on the ARBA Scholarship Committee, is the Pennsylvania State Rabbit Breeders Association's Majestic Mini Rex Specialty Club Director,  and serves as the Majestic Mini Rex Specialty Club Vice-President.  She has previously served on the National Mini Rex Rabbit Club's Judges Selection Committee and as a 4-H leader for Monroe County Rabbit Clubs for ten years.

I have previously served as the ARBA's District 9 Youth Director, NMRRC's District 9 Youth Director, MMRSC's Youth Director, and as the 2007 PaSRBA Queen and Commodity Representative.  I have previously served on both the Pennsylvania State Rabbit Breeders Association's and North Carolina Rabbit Breeders's Association's Youth Committees . I thoroughly enjoy being active in all of my endeavors, so if you ever need anything please do not hesitate to contact me!  I am available to judge 4-H shows and showmanship.  I can also present educational speeches/presentations on a variety of rabbity industry related topics at different functions and have presented at numerous ARBA District Judges Conferences.  Feel free to email me or call me at any time!

We hope you enjoy your cyber visit with our Mini Rex, Florida Whites, and Satins and that you will come back to visit soon!  If you have any questions please email us.  Enjoy! 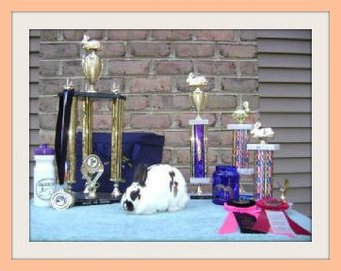 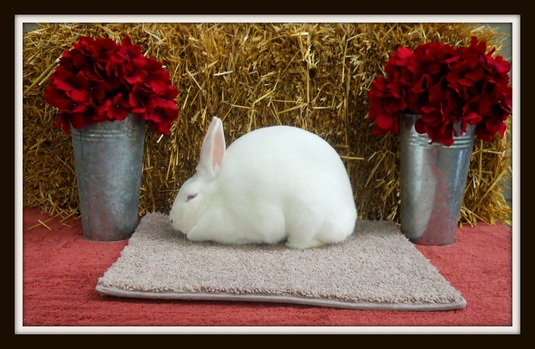 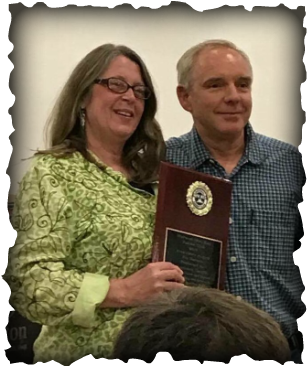 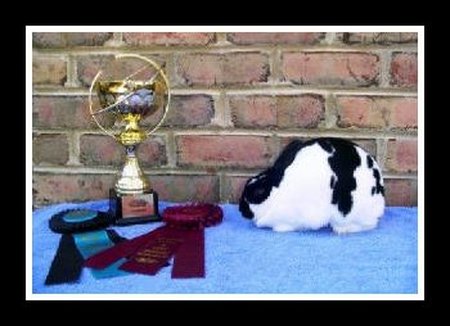 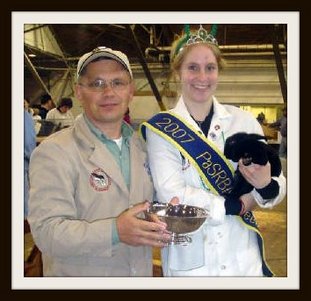 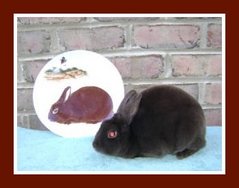 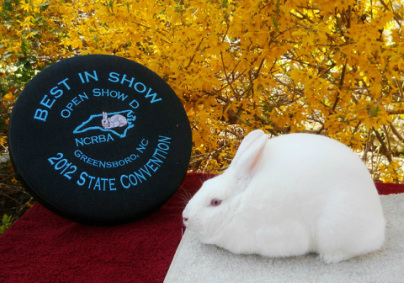 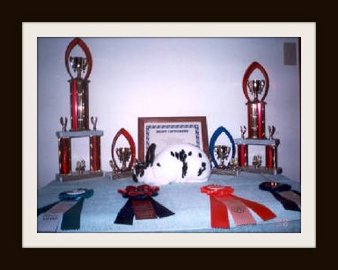 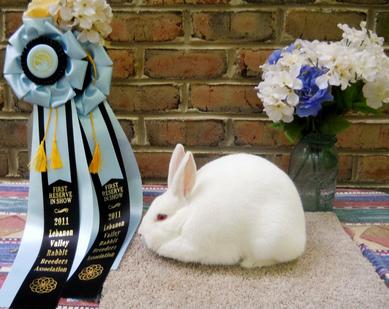 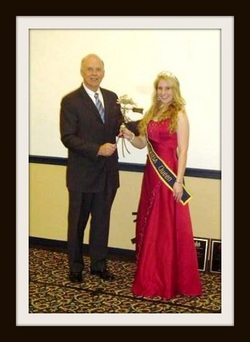 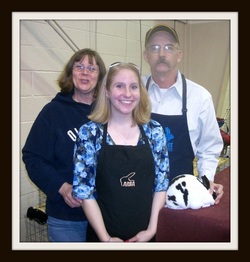 At the Steuben County Show in Bath, NY on 8.21.17 we won Best of Breed and Best Opposite Sex Mini Rex with Briallu Bellamy {Broken Jr. Doe} and Briallu Antonio {Black Jr. Buck}!!  We also took Best of Breed Satin with GC Briallu Sasha!!!  We did not show any Florida Whites {they weren't sanctioned, so we skipped it!}

Briallu Diamond Diva {Florida White Sr. Doe} took Reserve in Show at the Tri-County RC Show on 10.16.16!!!!  We also had some other nice wins in Mini Rex, Satins, and Florida Whites that day!!!  Fresh off our trip to California for Convention ;)

Had an amazing BEST IN SHOW win with Briallu Jillan {Satin - Broken Blue Jr. Doe} at the Westmoreland County R&CBA Show B on 9.11.16!!!  Thank you so much to Judges Hannah Reynard and Patty Tarman for her wins!!!  :)  She is such a beautiful doe!!

Our first show of 2016 was the PA Farm Show!!!!  This was the 100th Anniversary show and it was an honor to be judging this prestigious event as well as showing at it :)  We won Best of Breed Mini Rex with Briallu Haven {Broken Black Otter Jr. Doe} and Best of Opposite Sex Florida White with Briallu Shot {Jr. Buck} :)

The first weekend in December was our last show of 2015!!!!  We were thrilled to win BEST IN SHOW at the Garden State R&CBA Show B with GC Briallu Kodak Moment {Florida White Sr. Buck} !!!  That boy is on FIRE!!  He is now a multiple Best in Show and Reserve in Show winner :)  We also won BEST IN SHOW in the MMRSC Specialty Show with Bella :)  Thank you to the Judges for recognizing our animals!!  We also won BOB and BOSB Satin in Show with GC Briallu Gigi and Briallu Giovanni :)

The weekend after Convention we dove right back into our normal schedule with a rabbit show!!!  Thank you to the Carroll County R&CBA club for a great show and having me down to judge!!!  We were thrilled to win BEST IN SHOW in Show A with GC Briallu Kodak Moment {Florida White Sr. Buck} !!!  In Show A we won BIS, BOB FW, and BOSB Satin.  In Show B we won BOB and BOSB FW and BOB and BOSB Satin!!  :)

We had an amazing time at the 2015 ARBA Convention in Portland, Oregon!!!!  The landscape was incredible and we were so lucky that we were able to sight see so much!!  We also had a wonderful time with our rabbit family :)  Look for photos from our trip!!!  :) 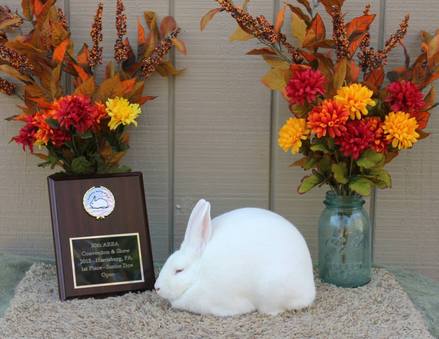 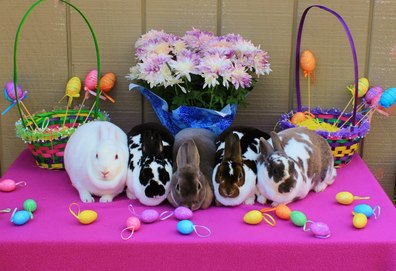 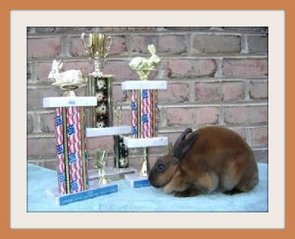 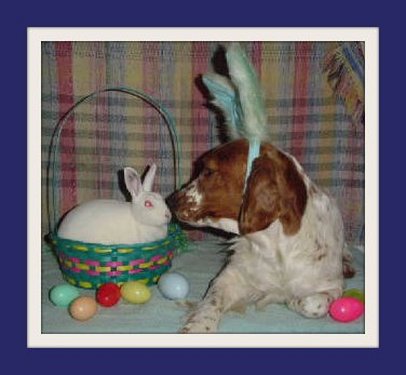 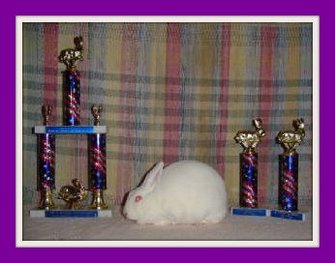